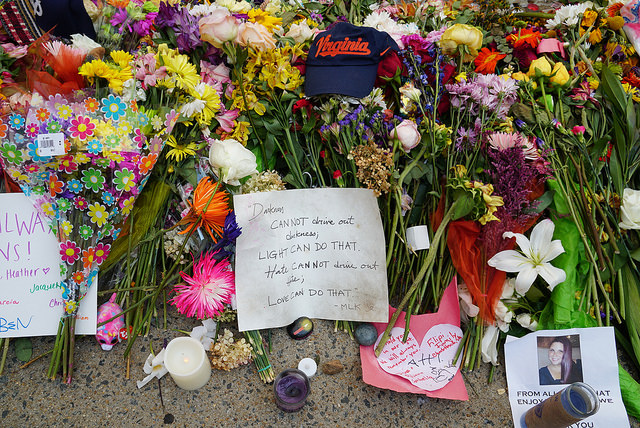 Bee Measure is proud to be based in Charlottesville, Virginia. Much has already been said about the events of last weekend, so I debated whether to add my voice in the mix. Then on Wednesday, a friend and I took a walk to see the impromptu memorial of flowers, candles, writing and gifts that mourners assembled at the scene of the crash. I wanted to share the photo my friend took. The image says a lot about the mix of sadness, apprehension and determination we all feel this week. As nonprofits (and nonprofit supporters), we do great work. And we will persevere.
– Emily (from Bee Measure)

Who’s on First, Oops, Facebook?
Business Insider published a new report about the demographics of our fav social media platforms. Here are the free takeaways. And here’s my summary: Snapchat is getting older, LinkedIn is richer and everyone’s on Facebook.

Gender Positive Does Better, Swears Facebook
I’m not sure how much faith I put in research done by Facebook about Facebook to promote Facebook advertising, but I still am heartened by its study of gender in advertising. For an industry that loves to use images like this, it’s good to have stats that ads promoting equality pay off.

Pittsburgh, Not Paris
I love a good case study, so here’s Pittsburgh’s Chief Data Officer talking about how the city built an open data site that displays 311 calls and police blotter data. And the name is a pun too. Gotta love it!

The Protest in IP Addresses
It’s been a while since I’ve covered data privacy issues related to the Trump administration. But it’s back. In the winter, anti-Trump protestors used the site DisruptJ20.org to organize Inauguration Day protests. Then, the Justice Department issued a request for 1.3 million IP addresses to identify site visitors. Now, the site’s hosting company is resisting.

Advice of the Week

End Web Form Intimidation
Your site probably has a form, or two, or 10. Mine has several, and it only has a dozen pages. I love the content from MarketingExperiments.com, and this video on optimizing website forms provides solid advice. (Just ignore the annoying ads.)

Cool Visualization of the Week

86% Eclipsed
Let’s end this on a fun note. Nothing is currently bringing the US together quite like the solar eclipse. So here’s Vox’s fun, interactive graphic to show you what the eclipse will look like in your zip code. Why can’t you be closer to totality, Charlottesville! 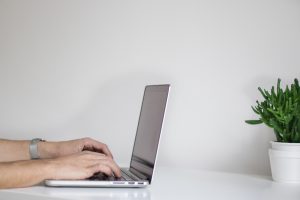 When the Journey is the Goal
Many nonprofits use social media to promote education and awareness of a cause. They don’t necessarily have conversion in mind. So how can a savvy nonprofit communicator evaluate this type of social content and campaigns?  Well, MarketingLand does a nice job of explaining alternative metrics. (Interested in setting this up for your website? Reach out. )

Explain Like I’m Five: Machine Learning Edition
“Machine learning” is one of those buzzy terms that gets thrown around a lot. I was happy to stumble on this nice explanation of what it is (and is not).

And now that we know about machine learning… here’s Engadget explaining how Facebook uses the technology to detect fake ads.

Talking to Your Data
I recently covered Google Analytics’ new feature that is supposed to allow analysts and business people to get data by asking questions, rather than running reports. Well, it looks like Tableau is barking up the same tree. They recently acquired start up ClearGraph, a service that lets users visualize data through natural language queries (think “this week’s transactions over $500”).

END_OF_DOCUMENT_TOKEN_TO_BE_REPLACED

Measure Your Differences
I enjoyed this advice from Hootsuite on how to pick social media metrics. Their number one tip: figure out your organizational goals and base your metrics on that. (And don’t worry about what everyone else is measuring.)

Google’s Most Expensive Keywords
If you administer a Google for Nonprofits AdWords grant, finding keywords that cost less than $2 can be a big pain. Having struggled with this issue myself, I got a kick out of seeing how much some keywords cost. $58 for “bail bonds,” anyone?

Yet Another Nail, Twitter
I’m not a big Twitter user, but even I feel bad for Trump’s favorite social media site. Here’s the latest report about Twitter’s decline. Monthly active users in the United States fell last quarter.